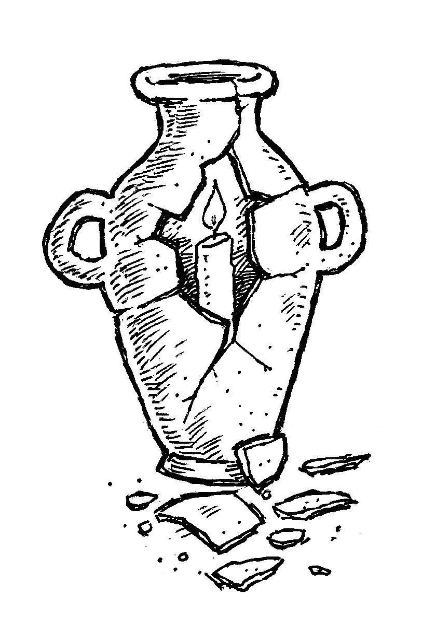 In 2 Corinthians 4, Paul speaks of the role of an evangelist.

We do not preach ourselves but Christ Jesus as Lord, and ourselves as your bond-servants for Jesus’ sake. For God, who said, “Light shall shine out of darkness,” is the One who has shone in our hearts to give the Light of the knowledge of the glory of God in the face of Christ. But we have this treasure in earthen vessels, so that the surpassing greatness of the power will be of God and not from ourselves (4:5-7).

Paul makes it very clear that he does not go from city to city drawing attention to himself, or calling people to be saved in his name. Instead, he proclaims Jesus as Lord, and he thinks of himself as a servant to his hearers. To further his point, Paul says “we have this treasure in earthen vessels.” What does this mean?

A vessel is a container that carries something from place to place. Paul’s phrase refers to pots made of clay. In the ancient home, clay pots were ordinary, cheap, and fragile. Paul means that he and his fellow evangelists are frail human beings, made of dust and destined to return to dust. Paul himself was beset by the same ailments to which every other human being was subject. Furthermore, Paul and his companions suffered persecution everywhere they went. If the Corinthians were looking for God’s spokesmen to be superhuman, they would be disappointed.

What about the treasure inside? Paul refers to the gospel, the “light of the knowledge of the glory of God.” What a treasure indeed; a priceless message with the power to save (Romans 1:16)!

Perhaps it feels somehow strange that weak mortals would be entrusted with carrying the light of the gospel. Normally, when a wealthy person purchases an item of great value, he purchases an equally extravagant container for it. Firearms are stored in expensive safes, diamonds are set in precious gold, musical instruments are carried in sturdy cases. Shouldn’t the bearer of a special word from a special God look special, and garner honors as befits his station?

God set it up differently. He has placed the gospel into the hands of Christians (Matthew 28:19-20), who remain weak and worthless and unattractive by the standard of the world. “We have this treasure in earthen vessels so that the surpassing greatness of the power will be of God and not from ourselves” (4:7). A fancy vessel might distract from the precious treasure. A fancy orator might cause people to think the messenger rather than the message is the chief attraction. When the church grows, people will not be able to credit amazing and skillful people, only an amazing and powerful God (1 Corinthians 3:5).

This follows a pattern that God set from the beginning. He chose Moses, a man slow of speech, to inspire the nation of Israel and lead them out of captivity (Exodus 4:10-12). He chose Gideon, a man of no status (Judges 6:15-16), to defeat the Midianite army with a force of just 300 men, so that Israel could not boast (7:2). He chose David, a shepherd boy and the youngest of his brothers, to defeat huge Goliath and become king of Israel (1 Samuel 16:11). The fullness of Godhood (Col. 2:9) took on flesh in the form of Jesus, born in a stable and raised in lowly surroundings. And so it is with the church (1 Corinthians 1:26–29).

It is God’s desire that no one confuse the earthen vessel for the treasure within. Let Christians be considered foolish and despised, so that God will receive the attention. It is “the greatness of the power of God” which converts the world, not the charm of the church or the charisma of its ministers. A rich and successful church might give people the wrong idea about the cost and outcome of obedience to Jesus.

The commission has been given; the treasure has been deposited into earthen vessels. Now all that stands between the gospel treasure and some soul’s salvation is our own diligence. Indeed, our willingness to put aside our own desires and make the gospel the priority makes us in the image of Jesus.