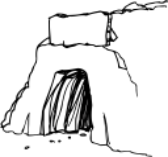 David waited patiently for God to depose Saul and make him king instead. Meanwhile, Saul tried to kill David, and forced him to live on the run in lowly, dirty, dangerous circumstances.

Few could doubt David’s ability or integrity, but, judging from physical circumstances, not many were willing to bet on him actually escaping Saul and gaining the throne (1 Sam. 25:10). Still, the renown of David’s character and deeds spread throughout Israel, and he began to attract loyal helpers and followers. At one point, while David was living in the cave of Adullam, four hundred men joined his band. The description of the men is interesting:

These are hardly the sort one would intentionally build an army with! They did not start out as great men—though many of them would later be identified as warriors and champions (1 Chron. 11). They were not mercenaries, for David couldn’t pay them. They were not attracted to David’s stature, position, or dwelling, for he had none. They were, like David, beleaguered, downtrodden, without hope or prosperity in the world. They were suffering under the worldly and corrupt reign of Saul, and saw in David something better. He represented a righteous way, which they were willing to sacrifice and suffer for. The prospect of his kingdom was the promise of a better, godly future.

As these gathered to David, so people gather to Christ’s army today.

There is very little to recommend Christ as king or leader. He didn’t come dressed in purple robes or dwelling in a palace. He had “no stately form or majesty” (Isa. 53:2).

Christ doesn’t offer or earthly riches, a big house, a fancy car. In fact, it might be quite the opposite for a long while. When His kingdom comes in full, then the blessings of the heavenly mansion will be enjoyed. But now He offers fellowship with God, and forgiveness of sins. Thus, a disciple of Jesus is willing to say, “wherever my lord the king may be, whether for death or for life, there also your servant will be” (2 Sam. 15:21).

Christ’s followers are not necessarily in distress and in debt because they’ve made so many awful and sinful decisions (though, this can be the case too). His followers “are distressed and dispirited” (Matt. 9:36) because they have discovered that the world offers little of permanent satisfaction. They are upset with their sins (Luke 5:31-32). Christ offers leadership, forgiveness, and victory over the world.

Christ’s followers don’t look like much. One of the most frequent criticisms of Christ by the self-assured, self-righteous Pharisees was that He kept company with sinners, prostitutes, tax-collectors, Samaritan women, fishermen, and the like.  He was called “friend of sinners” (Luke 7:34). But they followed Him in droves! The poor, the meek, the downtrodden, the oppressed, the one hurting from the weight and the consequences of sins are the ones looking for God. “Those who hunger and thirst for righteousness will be satisfied” (Matt. 5:6).