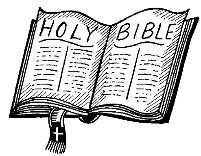 You’ve probably noticed that many editions of the Bible, maybe even the one you are holding, print the words of Jesus Christ in red ink.

The first red-letter edition was conceived by Louis Klopsch in 1899, titled The New Testament: With All the Words Recorded Therein as Having Been Spoken By Our Lord Printed in Color.

Klopsch lived in a time like our own, when liberal scholars were casting doubt on the sayings of Christ. Klopsch wished to elevate the words of Jesus to a position of prominence, “to stand out vividly conspicuous in the distinction of color.”

Klopsch’s New Testament was such a success, he followed it in 1901 with a full Bible, The Holy Bible: Red Letter Edition. Major Bible publishers, such as A.J. Holman, quickly began printing their own red-letter editions.

Klopsch’s efforts were honorable, and probably resulted in an increase of Bible knowledge. After all, the words of Jesus are extremely important, and should be read, treasured, and obeyed. Red letters pop up in interesting places, not just in the four gospels. In Acts 9, for example, red ink emphasizes that it is the resurrected Jesus speaking to Paul in a vision. In Acts 20:35, a splash of red in a sea of black draws attention to a statement of Jesus not recorded in the gospels. In 1 Corinthians 11, Paul quotes the very words of Jesus at the last supper. In the opening and closing of Revelation, the glorified Christ sends instructions to His followers on earth.

This is a misguided approach to Scripture. It’s not OK to deemphasize or disregard the black letters. The apostles and prophets spoke with the authority of Jesus. There is, in a sense, a chain of communication.

Jesus, in turn, entrusted His word to His apostles and prophets. Paul says, “we are ambassadors for Christ, as though God were making an appeal through us” (2 Cor. 5:20). Jesus said to His apostles in John 20:21, “as the Father has sent Me, I also send you.” Here’s how: “The Helper, the Holy Spirit, whom the Father will send in My name, He will teach you all things, and bring to your remembrance all that I said to you” (John 14:26, 16:12-13). Paul’s words are Jesus’ words are God’s words.

Jesus sums it all up in Luke 10:16 (itself a red-letter text) speaking to his apostles, “The one who listens to you listens to Me, and the one who rejects you rejects Me; and he who rejects Me rejects the One who sent Me.” Thus, the black letters–Acts, letters from Paul and others, John’s Revelation–are the very words of Jesus! The words went from the Father to the Son to the Apostles and prophets, and come to us on the printed pages from Matthew 1 all the way through Revelation 22.

Besides, common sense teaches us that it is silly to treat the red letters of Christ as authentic, and the black letters of the apostles as uninspired. Why? Because we don’t possess one single line of text from Jesus’ own hand! The red letters aren’t really the words of Christ—they are the words of Matthew, Mark, Luke, John, and Paul reporting the words of Christ. We don’t know one thing Jesus said except through the writings of the eyewitnesses and prophets. We trust that Christ inspired his Apostles to accurately report His words.

Finally, remember that, like capitalizing “Law,” or “Spirit,” red highlights are an addition of our Bible editors, and are open to examination and debate. In John 3, for example, I believe that the actual words of Christ end in verse 15. If you compare 3:16–21 to John 1:1–18, you might agree that John 3:16–21 records the comments of the apostle John rather than the words of Christ. That’s right–I don’t think it was Jesus who spoke John 3:16.

And what about O.T. passages where Jesus is the speaker, such as Isaiah 6:9–13 (John 12:41 tells us that Jesus was the one on the throne); or Psalm 16 and 22 where the Savior speaks? It’s difficult to be perfectly consistent with red lettering.